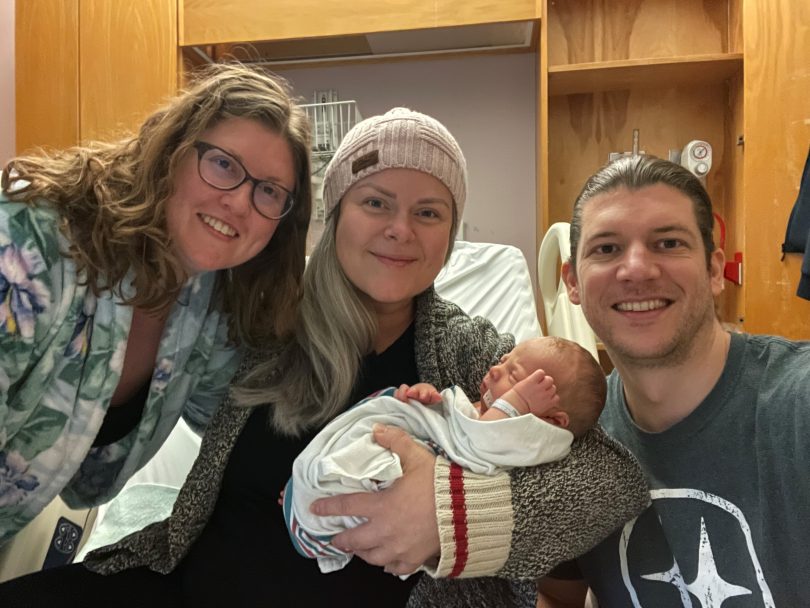 This Mother’s Day is particularly special for Natalie Daniels. It’s her first, after she and husband Dave welcomed son Ronin into the world on January 10 at St. Paul’s Hospital.

It took 10 years for her to become a mother – a decade of hope, crushing disappointment and ultimately joy, thanks to the generosity of friends who believe everyone deserves the chance to be a parent.

The complicated path to parenthood involved many who shared that view, including the St. Paul’s Maternity Program that supported the birth in the middle of a COVID wave.

Natalie and Dave wanted children from the outset. But after unsuccessful attempts to conceive naturally, they had to confront infertility. They tried in-vitro fertilization (IVF) at a private clinic and had several unsuccessful cycles.

Another blow soon came. Natalie experienced health issues that required a hysterectomy. She would be unable to carry that embryo and the couple would need to enlist a surrogate, an enormous leap into the unknown.

They contacted an agency and were matched with a woman but she didn’t pass the health screen. They went on another list. More waiting.

Dave remembers visiting the couple when the infant was just weeks old. “With my bad sales pitch, I jokingly asked them if they wanted to go another round and (have the baby for us.)”

The surprising thing is, Candice didn’t say no.

“Candice said she’d do it”

“I couldn’t imagine not being able to have children,” says Candice. “I kept thinking about Nat and Dave. One night I texted Dave, ‘is it weird that I often think … about being your surrogate?’”

Then in a move that would shift everything, Patrick texted Dave, “Candice said she’d do it if you haven’t found anyone by next June.”

The Daniels were incredulous and deeply grateful.

Candice underwent the embryo transplantation the following May at the fertility clinic where it was created. “I had a feeling almost right away that it was going to work.”

She was right. She became pregnant with baby Ronin that May.

Because IVF had failed the Daniels so often, they tried to manage their emotions. “Candice kept saying, ‘we’re having a baby,’” says Dave, “but we were wary of another disappointment.”

The birth was planned at St. Paul’s Hospital

Natalie’s surrogacy counsellor assured her the pregnancy was medically fine. “She told us not to be even cautiously optimistic. She said to be happy and believe 100 per cent this pregnancy will work.”

It did go smoothly, and a caesarian section was scheduled for early 2022 at St. Paul’s.

St. Paul’s obstetrician Dr. Jennifer Yam would deliver the infant, her first involvement with a surrogacy birth. She had also delivered Alice.

Meanwhile, the Omicron variant had exploded into another wave, limiting visitors to St. Paul’s and certainly the number of people in the OR for the birth: just one support person for Candice. After going through so much to get to this point, Dave and Natalie took this in stride. He joked, “Let’s set our expectations to the level that we’ll stand outside on the sidewalk and the doctors and nurses will hand us a baby.”

But Candice, who had gotten to know St. Paul’s Maternity Program’s Andrea Firmani, wondered if there might be some flexibility.

Firmani, a Clinical Nurse Educator, asked decision-makers in maternity and anesthesiology (which has the final word on numbers of people in the OR) to see what could be done. Emails flew back and forth as late as the Friday afternoon before the Monday delivery.

Then the OK came that Natalie and Candice’s husband Patrick could be in the OR. Dave could watch the birth live, down the hall, via FaceTime.

“Family togetherness and patient-centred care are values of Maternity and St. Paul’s,” Firmani says. “This ended up as a great example of different programs working together.”

There were tears aplenty in the OR and with Dave down the hall as Natalie held the baby she had wanted for so many years.

“Natalie was able to meet her baby the moment he was born,” says Firmani. “That’s how it should be.”

St. Paul’s would make more arrangements for the couples, including finding a room large enough for Natalie and Dave to spend the night with Candice.

Maternity made other adaptations. While Ronin was listed as “Baby Johnston” on paper, the nurses always called Natalie and David the mum and dad.

Then after Candice was discharged, Natalie and Dave stayed for a few more hours as the nurses taught them how to bathe, diaper and feed Ronin (Candice provided breast milk for Ronin for eight weeks.)

The four are deeply grateful to the programs at St. Paul’s for making this extraordinary birth so positive, especially Maternity.

One day they will tell Ronin all about it. “As soon as he can talk, he’s going to get the story,” jokes Candice. “And I’m going to give him s*** for giving me stretch marks.” Natalie vows: “He’ll mow their lawn.”

Candice and Patrick view Ronin as part of their family, just not biologically.

And Candice says, “I would do it again.”