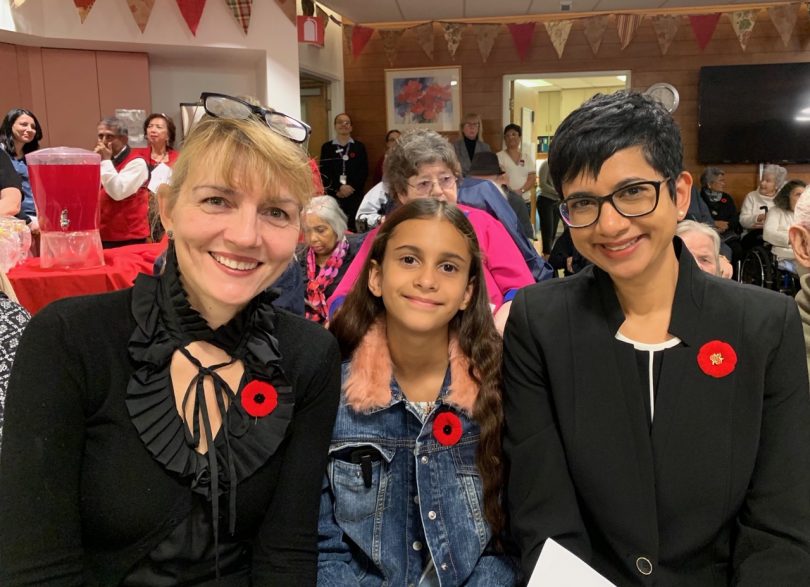 In light of Remembrance Day (November 11), we’re revisiting Providence’s deep roots in caring for veterans who have served to protect our freedom, and also to honour all those who have made the ultimate sacrifice.

Providence Health Care has a long history of caring for the most vulnerable, especially in times of hardship and tragedy, including World Wars I and II and The Great Depression (1930s). The five Sisters of Providence first arrived in Vancouver in 1894, and while they faced many challenges during their years of service, the wars brought on another layer of complexity of caring for the most vulnerable. 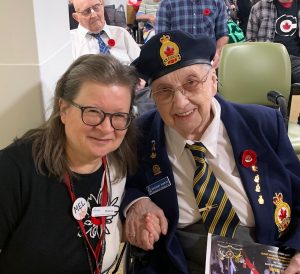 When World War One first broke out in Europe (August 1914), the impact was felt immediately at St. Paul’s Hospital. Several of the hospital’s nurses were amongst the first wave of Canadians sent to the war zone. More than 3,000 Canadian nurses, as well as several St. Paul’s doctors, enlisted and served during WWI. Many were killed, or returned back home wounded and were unable to return to active medical practice due to the tragedies and trauma associated with the war.

While the war brought on much devastation, one positive aspect was the increasing value placed on nursing roles, responsibilities, and services. Many of St. Paul’s nurses returned from the war with a growing self-confidence in their profession and ability to serve the public. In addition to gaining self-confidence, St. Paul’s nurses who had returned from their overseas experience became a close-knit and strongly unified group, with a continuing respect for sacrifice and compassionate care.

Caring for our veterans post-war 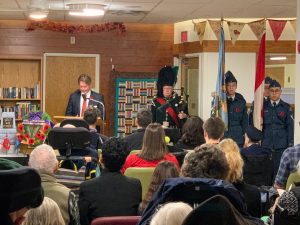 From the very beginning, the Sisters of Providence were committed to providing care for all, including war veterans throughout the years.

At Providence, we’re proud to have inherited a history and tradition of caring for our veterans. These include past soldiers, nurses, doctors, and many more who have risked their own lives in order to fight for our rights, freedom and country.

Across Canada, and in many other countries, people gather on November 11 to honour the courage and devotion of brave men and women who risked their lives for their country, and especially to remember all of those who never came home. 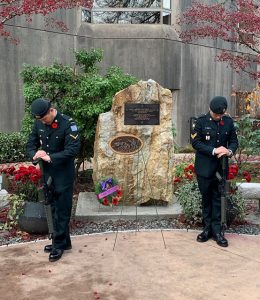 Brock Fahrni’s service began at 10:30am with bagpipes leading a colour party from the 111 Pegasus Royal Canadian Air Cadet Squadron into our dining hall followed by the singing of “O Canada”.  Guests from Providence Health Care’s Senior Leadership Team and Veterans Affairs Canada brought greetings and read reflections for Remembrance Day.  Tears were in the eyes of our veterans, residents and family members as a bugler played The Last Post. Jets from the Royal Canadian Air Force heading for the Cenotaph downtown were heard overhead during the moment of silence.  Following a reception, troops from the 12 (Vancouver) Field Ambulance medical unit marched to their Cenotaph located in the garden at Brock Fahrni – a stirring end to a powerful day of remembrance and reflection. 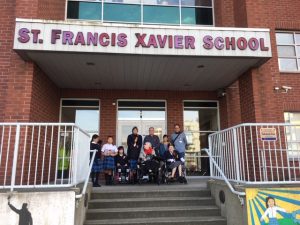 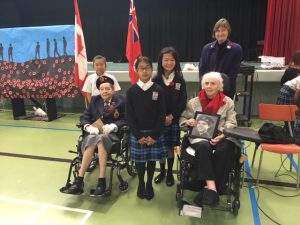 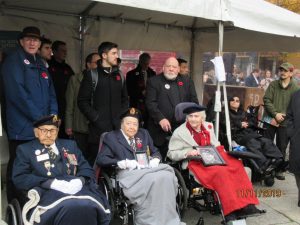 Penny Stirling and Colleen de Serres were also invited to attend the Remembrance Day ceremony held at Victory Square in downtown Vancouver. Penny, a war sergeant in the Royal Air Force during WWII, was asked to lay a white rose at the cenotaph this year in memory of her fallen comrades. Last year Colleen, who served in the NATO peacekeeping effort during the Korean conflict, was asked to lay the rose. Both veterans were joined by family members and loved ones. Colleen’s daughter Gabrielle and grandson flew in from Texas and surprised Colleen. She cried and said that this was the happiest day of her life. Penny’s son Brian and granddaughter were also on hand. The women were interviewed by several media outlets. 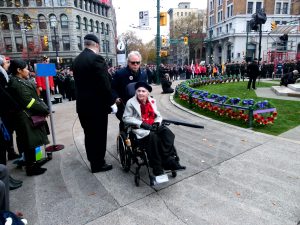 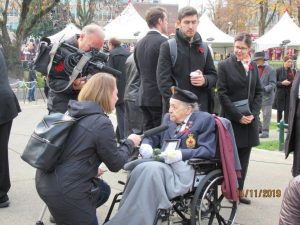 Watch and read Colleen and Penny’s interview on Global News and CTV News.

Check out the photos from this year’s Remembrance Day Ceremonies on the Vancouver Sun.

Thank you to those who have served our country.

To each of our veterans we want to say, “Thank-you for giving your all and for serving our country in times of need.  It is a privilege to serve you at this time in your lives.”  We honour our veterans, friends and family members, and we make them a pledge.  We will continue to work for peace and understanding among all people.