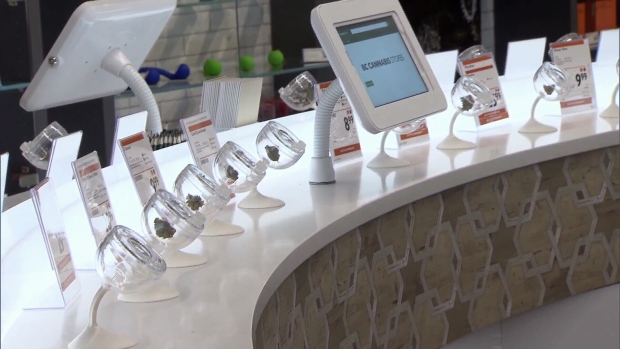 The BC Cannabis Store in Kamloops has been compared to an Apple Store, with its shiny white countertops and touchscreen browsing computers. (Photo courtesy of CTV News)

The debate on a motion proposing easier access for opioid alternatives in the city’s Downtown Eastside is expected to begin again Wednesday, when Vancouver city council meets to discuss policy and strategic priorities.

Submitted by Councillor Rebecca Bligh in late May, the motion titled “Cannabis as an Alternative to Opiates and More Dangerous Drugs on the Downtown Eastside” proposes amending an almost four-year-old exclusion zone keeping medical marijuana from being sold in one of the city’s most vulnerable communities.

The motion argues that both the Vancouver Overdose Prevention Society (OPS) and High Hopes Social Enterprise, a DTES support and sustainability organization, support low-cost, legal cannabis options backed by Dr. Evan Wood, the executive director of the BC Centre on Substance Use (BCCSU), as well as Dr. Mark Tyndall, Executive Medical Director for BC Centre for Disease Control, and Dr. M-J Milloy.