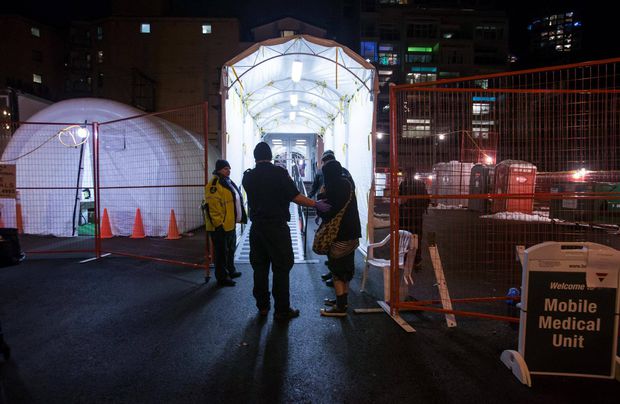 A woman is helped into the Mobile Medical Unit after a suspected overdose in the Downtown Eastside on Dec. 21, 2016. (Photo Credit: BEN NELMS/THE GLOBE AND MAIL)

The woman sits slouched in a black folding chair, slowly regaining her strength. She is recovering from her second overdose since being released from jail just four days earlier and physicians are watching her closely. She is crying.

The woman is at the Mobile Medical Unit (MMU), a satellite emergency room established in the Downtown Eastside in mid-December to help deal with the city’s surge in overdoses and relieve crowded emergency rooms. Instead of St. Paul’s Hospital, paramedics take patients to the expandable trailer parked on the former site of a homeless encampment, where they are seen immediately by physicians and nurses.