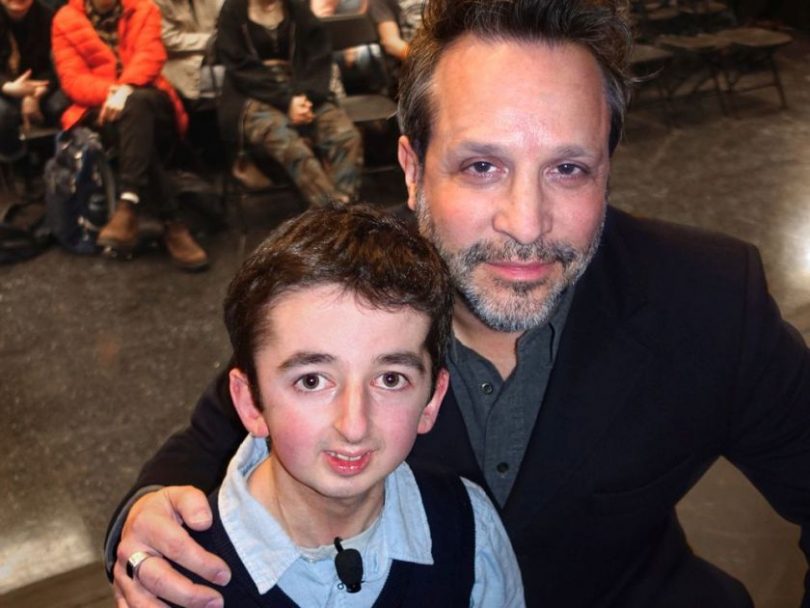 Weighing 25 kg and standing 122 cm tall after a stroke and 10 brain-tumour operations, Casey Wright, 19, has had Ben Ratner incorporate his words and videos of his many activities into a play titled Casey and the Octopus. (Photo credit: Vancouver Sun)

SPEAKING UP: Casey Wright was 14 and had had 10 brain-tumour operations by 2015 when moviebiz veteran Danny Virtue announced he would executive-produce a film about him. Now 19, Casey weighs 25 kg, is 122 cm tall, and the movie has become integral to a play based on his own words that was written and directed by Ben Ratner.

Presented by East End Boys Club, the one-act Casey and the Octopus ran recently in Templeton Secondary School’s theatre. The club was founded by Octopus co-executive producer Jim Crescenzo who taught two generations of Templeton theatre students. One grad thanked him “for helping me stand on my own two feet, which are strong and no longer let me fall.” Casey Wright’s own feet can be shaky, courtesy of a 2013 stroke that paralyzed his right side and rendered speech impossible. Lengthy therapy restored the latter enough for him to advise audiences: “When you’re climbing that mountain and the clouds part to show you there’s still a long way to go, tighten your boots, take a deep breath, and keep climbing.” His father, Larry, says the “Octopus” in the play’s title refers to what the first brain tumour looked like in medical scans. Casey subsequently refused scar-reducing surgery. “I’m keeping ’em,” he said. “They tell the story of what I am and what I’ve been through.” That is a lot, with more perhaps to come. Nevertheless, he ends the play on his feet and telling audiences: “If I had been ‘normal’ I wouldn’t be standing here talking to you guys. And talking to you is what makes me feel alive. It’s what makes me get out of bed in the morning and keep going.”

Click here to read the full story on the Vancouver Sun.

Similar story can be read on the following media outlet: The Kingston Whig-Standard.