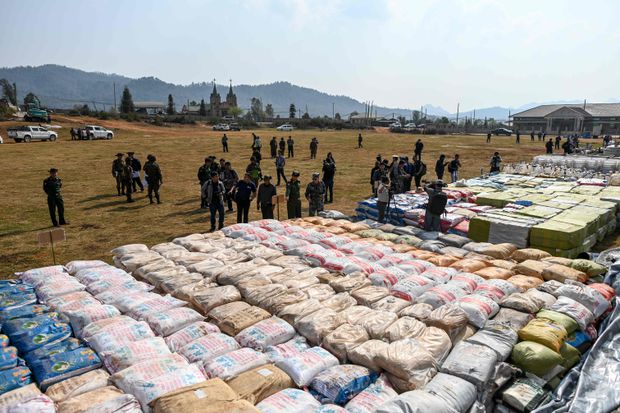 Foreign military attaches inspect drugs, vehicles, laboratory accessories and chemicals on display at a football field for invited journalists and military personnel in Kawnghka, at Shan State on March 6, 2020. (Photo credit: The Globe and Mail)

When Pascal Tanguay found traces of fentanyl in a small batch of heroin in Bangkok last fall, he was appalled but not surprised – he had suspected that the deadly synthetic opioid was causing overdoses all across Southeast Asia for months. When authorities in Myanmar found almost 3,800 litres of a particularly potent form of the drug during a raid in the spring, he was shaken.

The bust marked the first time fentanyl production had been discovered in Asia’s Golden Triangle and confirmed the worst fears of activists and experts: The powerful drug was already in the region and, if left unchecked, could spread to countries wholly unprepared for it.

Kanna Hayashi, a researcher with the BC Centre on Substance Use and the St. Paul’s Hospital chair in substance use research, has tried to fill that hole in the data throughout her career, producing dozens of academic papers between 2009 and 2018 in partnership with the Mitsampan Community Research Project in Thailand. Her work is some of the only research on opioid overdoses there and the trickle-down effects of what she calls violent, “draconian” policies.