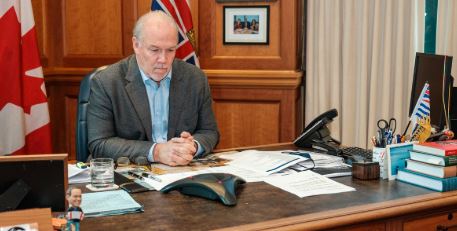 As Vancouver Catholics come together in prayer vigils and petitions in opposition to the B.C. government’s closing of churches to public worship, Archbishop Miller has been in phone conversation with B.C.’s health minister to see if a way can be found to reopen church doors again.

Archbishop J. Michael Miller told The B.C. Catholic he had a “very productive” phone call with Health Minister Adrian Dix this week to discuss the goal of re-opening Catholic churches to public worship while keeping British Columbians safe during the pandemic.

The archbishop said Dix acknowledged that Catholic churches have done an exemplary job of following established COVID-19 guidelines, and the minister proposed that they talk again on Dec. 2 to update each other on the situation, the archbishop said.

He added that through Providence Health Care, the Catholic Charities Men’s Shelter, Downtown Eastside meal services, and other charitable ministries throughout the region, “we are working to help as many British Columbians as we can during this challenging time. We are striving to live by our motto the Church Never Stops.”

Click here for the full story on The B.C. Catholic.