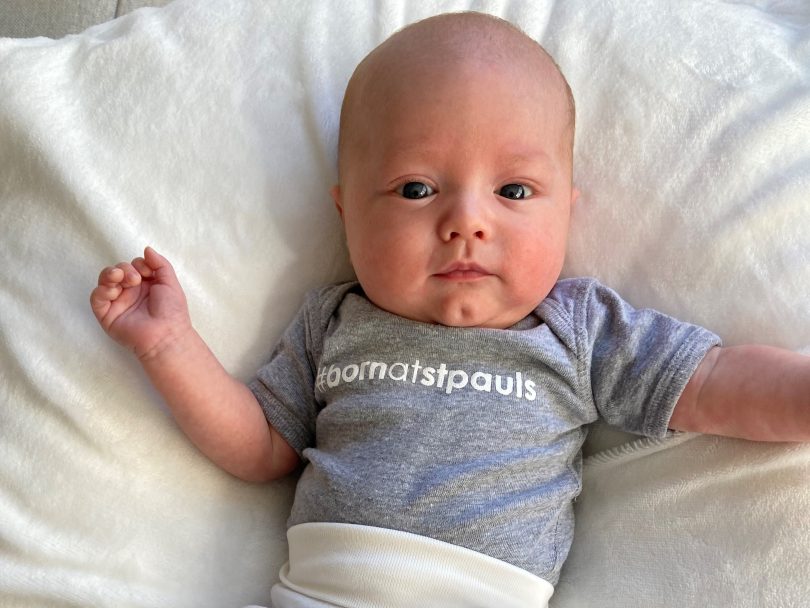 When she was 33 weeks pregnant, Cliona Callaghan felt “just a slight pain” so she went to St. Paul’s Hospital as a precaution.

“I didn’t think anything of it, really, because I thought I still had seven weeks to go,” says Cliona, who had been a patient at the St. Paul’s Maternity Care Clinic from the start of her pregnancy.

To her surprise, she was kept in hospital. And to her even greater surprise, five days later she gave birth to a baby boy weighing five pounds, two ounces.

Milo Massey came into this world on September 4, 2022 – more than six weeks before his official due date of October 19. His early arrival was unexpected, given that Cliona’s pregnancy had been normal to that point.

“Everything had gone so smoothly, so it was a complete shock,” she says. “Still to this day, I’ve no idea why he came early. It was a big surprise.”

Majority of babies in the NICU are premature

Worldwide, approximately one in every 10 babies is born “premature” (also known as preterm) – defined as being born at fewer than 37 weeks gestational age, as opposed to full-term at approximately 40 weeks. These newborns face increased risks immediately. In fact, 70 to 80 per cent of babies in the St. Paul’s Hospital Neonatal Intensive Care Unit (NICU) are premature.

When Milo was born, he was taken to the NICU where he stayed for 15 days. He needed an incubator to help regulate his body temperature, a feeding tube to help him eat, and phototherapy to help with jaundice (a yellow discoloration of the skin and eyes caused by too much bilirubin in the blood). He also required close monitoring of his heart rate and breathing.

“When your baby is so small, it’s such a scary experience, especially for first time parents,” Cliona says.

That anxiety was compounded by the fact that she and her partner moved to Vancouver from Ireland several years ago and don’t have a large support network here. Fortunately, they live near St. Paul’s and could spend most of their time in the NICU, where the staff gave them a crash course in newborn care and assuaged their worries.

“The nurses were so amazing, they taught us everything. They were really confident that things were going to look up. It took the pressure off us and made us worry a lot less.”

Cliona initially received prenatal care from family doctors at the Maternity Clinic. When it became clear she would deliver prematurely, obstetrics stepped in to provide support. After the birth, pediatrics took over care of Milo, while family practice looked after Cliona. Lactation consultants also provided support. And after they were discharged, mother and baby continued to receive postpartum care from family practice and pediatrics.

“Despite the associated risk factors, Cliona’s birthing experience was normalized by providing patient-centered, wrap-around care within the Pregnancy, Birthing and Newborn Centre,” explains Amy Hamill, Patient Care Manager for Maternity and the NICU at St. Paul’s. “Integrated care was coordinated by three specialty groups, as well as a lactation consultant, a prenatal educator and a clinical support clerk.”

Milo has made immense progress in recent weeks. At just shy of two months old, he weighed in at close to 10 pounds.

Finally settled in at home and adjusting to the new routines of parenthood, Cliona is grateful for the specialty care Milo received at St. Paul’s during his first two weeks of life.

“Any time we did leave him in the hospital, even for just a short amount of time, we were confident that he was being well cared for. They look after your baby as if it’s their own.”